2013 is shaping up to be great already.  Tammy bought us a cruise for Spring Break and Christmas money helped us pay it off already.  Our boys will be turning 4 and 5, which means they'll be into more things, but less free park admission.  And Tammy and I will celebrate our 5th year of marriage and our 17th year of being together.

Two days after M went back home, we got J.  A completely different personality than M and just as cool.  It's looking very likely that we'll be adopting him early 2011.  Oddly enough, even though we have less time for each other, Tam and I have grown so much closer over the last year.  Having a kid around has been great for us and has redefined what "us" means.  Parenting means being happily exhausted most of the time.

As Bright House starts to roll out it's Road Runner Lightning service, the "Wireless Home Networking" solution that is bundled with it for free will begin to gain more traction. This will, unfortunately, mean plenty of wireless networks in Central Florida with insecure wireless settings.

Wireless settings such as SSID, pre-shared key, and allowed protocols are pre-configured by Bright House for your cable modem/router box and cannot be overridden. Attempting to change them within the router's administration control panel will seem to work for a few hours, but Bright House regularly resets your router's configuration back to its default settings. Bright House will not change your settings either, so you're stuck with whatever network name and password they gave you.

The default wireless protocol allowed is only WPA (WPA2 is available with the Surfboard wireless modem they gave me, but is disabled by default, for some reason).

The password for my router (and I'm assuming everyone else's) is a random eight digit passphrase. All numeric, no letters, spaces, special characters, anything. This means less than 100 million possible passwords, making it rather trivial to brute force your neighbor's wireless network with something like aircrack-ng. Devote some time to it, it's not like he can change it once he realizes someone is using his service.

The SSID name for Bright House WNS routers follows a predictable pattern that makes it easy to identify vulnerable routers. Mine looks like "BHNSBG6580????", which breaks down to "BHN" for Bright House Networks, "SBG6580" for the model number of the cable modem/router they gave me, and the last four characters of the MAC address of the router.

So if you see an access point nearby starting with "BHN" and looking similar to the one above, you can guess it's probably configured for WPA only and has an 8-digit numeric-only pre-shared key. Happy snorting!

I guess on the plus side, forcibly making the wireless access this easy to crack can add some plausible deniability if you're ever sued for downloading movies/music illegally.

After accidentally blowing up my Dlink router, I've been trying to find a decent replacement. I've been through three now in the past week. My most recent, a Netgear WNR2000 seemed to be the one I was finally looking for. I specifically exchanged router number 2 for the WNR2000 because this one offered everything the last one did plus "Multiple SSID support with separate security and access restrictions" (verbatim from the box), also known as "Guest wireless network".

After two hours of poking around and failing to find the options to configure the guest network, I finally broke down and called technical support, only to be disconnected twice, before finally being told this model doesn't support guest networks. After asking why the box said the router supported "Multiple SSID support", I was told this referred to a different model. "Well why is it on the box for *this* model then?" was met with little more than stammering.

So frustrated! Now I have to go back and exchange it for ANOTHER router. Best Buy has got to be close to blacklisting me by now. I just want my Dlink back. :(

Edit: Jon pointed out that even their website lists this feature in the specifications for this router.

When I left my job in 2008, one of my biggest fears was "Will I need insurance?" I was quite happy with my PPO insurance through InCharge (and earlier, the "pretty much everything's covered" dot-com insurance at Citrix). At my height/weight ratio back then, it was pretty much impossible to get private insurance, even HDHP+HSA plans with $5200 deductibles. I went uninsured for 7 months until Tammy took pity on me and we tied the knot.

At first I was a bit nervous about being on an Tammy's plan, as it was a Cigna HMO and I've heard nothing but trash talked about managed care...
All things considered, I've been pleased as punch about managed health care and think that my situation is as least a narrow, anecdotal view of how managed care done correctly can be a good thing.

And I'm writing this HMO love letter because I just heard back that my new $2000/month prescription I'll soon be taking was approved by my insurance company for a $0 copay.

Another year almost over:
Overall, a very satisfying year.

Now that I'm on Facebook, I've mostly stopped posting on LJ. With LJ, I feel like I need to have something important to say, which I usually don't. Twitter's inane one-liners and jarring, disjointed reply-to tweets were just annoying. Facebook strikes the perfect blend of promoting unobtrusive, minimal conversations/pics/links/whatever that are kept in a logical order.

So many more friends use Facebook over LJ as well, so I'm pretty much abandoning ship and just reading/commenting on LJ from now on. Look me up on Facebook if you want: http://www.facebook.com/mikeycooper

My ability to focus seems to have diminished significantly over the last few months. I find myself forgetting things more frequently and arguing points others aren't even trying to make. I will do something and then need to go back and look at what I just did to see what I'm supposed to do next. In the past week alone, I've forgotten my car keys at the bank, argued against imaginary code designs because I misread IM conversations (twice), forgotten to marinate dinner, forgotten to pack lunch, and left my ATM card in the ATM.

I dunno what happened to distract me so, but it's starting to become very frustrating. It's not like I have all that much on my plate (and apparently not a whole lot going on in my mind). Whatever the cause, I need to figure out how to get back into the swing of things.

Tam and I embarked on our honeymoon last week. We took a 7-day cruise to Alaska that was jam-packed with excursions. Pictures of it can be found on my Picasa album.

Juneau
Our first stop was in Juneau, where we took a nice float plane tour. We got to see a number of forests, mountains, and glaciers up close. The blue glacier ice was especially visible in Juneau. Eventually we landed at the Taku Lodge. We walked around the forest trails there for a bit before getting treated to a delicious salmon feast and learning the history of the lodge and its past owners. When all was said and done, we took another float plane ride back to Juneau.

Skagway
Our next stop was in Skagway, which unexpectedly became the highlight of the trip. Our excursion here was booked with Packer Expeditions. After taking a short train ride on the Yukon Route Railway, we were dropped off in the middle of nowhere next to the Tongass National Forest. Our guides led us on a 3 hour hike across some mildly rugged terrain. We hung back a little bit with Brooke, one of the guides, who pointed out various off-the-trail paths to explore, great photo spots, plants that could be eaten, and general information about the trail. It felt a bit like having our own private tour of the forest.

My favorite photo was from this excursion, for those who don't feel like looking through the 300 pictures in the album: 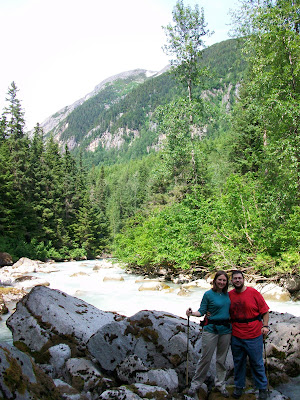 Ketchikan
After Skagway was Ketchikan, easily the town with the most charm and character of the three we visited in Alaska. Other than the harsh winters, it was the one we could see ourselves most enjoying if we lived there.

In Ketchikan, we did a kayaking/float plane combination excursion. We kayaked around a bit and our guide found and handed us various starfish and talked a lot about the surrounding forest and the necessity for conservation. We also saw a pair of bald eagles guarding their giant nest up in the trees.

Afterward, we had a nice salmon and hummus lunch on the boat before a float plane landed and pulled up. After boarding the float plane, we were flown around the Misty Fjords National Monument. The cliffs and waterfalls were gorgeous and we briefly landed at a small float plane dock to take some pictures. Out the windows of the plane, we were able to see a few pods of orcas at various times during the flight.

Victoria
Our last stop was in Victoria, B.C., where we visited Butchart Gardens, a garden built on top of a former limestone quarry. One of the largest limestone excavation sites was turned into a two-story-deep pit of flowers and plants called the Sunken Garden. Other parts of Butchart are parceled out into theme gardens, such as the Rose Garden, the Japanese Garden, and the Italian Garden. It rained for most of the time we were there, which allowed Tammy to capture some gorgeous close-up shots with water droplets on the flower petals.

Seattle
We got back into Seattle at 8am and our flight didn't leave until 11pm, so we decided to check out the Seattle Aquarium and Woodland Park Zoo. On our way to the zoo, we ran into a Seattle gay pride parade. We hung around for awhile, enjoying the costumed revelers, casting aspersions at the protesters and their "God hates fags" signs/rhetoric, and enjoying the absurdity of the anti-protester protesters and their "God hates fun" and "Marching is a sin" signs.

We also noticed several people running for office marching in the parade (one for Mayor of Seattle, I believe), which was surprising to me. Linking yourself to a gay-pride parade would be a death sentence here in Florida.


...so that was our honeymoon in a nutshell. We both had a blast and it's the first all-about-us extravagant vacation we've been on. I'm hoping it's not the last. This trip made me want to get out of Florida that much more.

I've almost forgotten about LJ ever since finally joining Facebook.

Tam and I started our long-awaited honeymoon vacation. We flew into Seattle yesterday and today we'll be boarding the Norwegian Pearl for a 7-day cruise of Alaska.